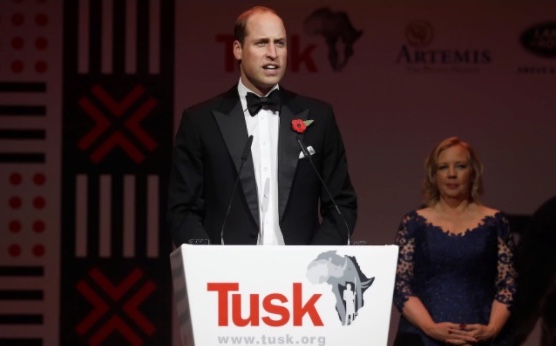 The Duke and Duchess of Cambridge will attend the Tusk Conservation Awards at the Empire Cinema in Leicester Square before joining a reception at the National Portrait Gallery.

His Royal Highness became Royal Patron of Tusk in December 2005. The Duke has actively supported the charity’s work both privately and publicly on many occasions and last visited Tusk projects in Namibia and Tanzania in 2018.

For almost 30 years, Tusk has pioneered successful conservation action in Africa by protecting wildlife, empowering communities and advancing the frontline in the fight against the illegal wildlife trade. The annual Tusk Conservation Awards celebrate the achievements of extraordinary people, whose work protecting Africa’s natural heritage might otherwise go unnoticed outside their fields.

The Duke of Cambridge will present three awards before delivering a short speech. The Tusk Award for Conservation is given to an emerging leader in conservation in recognition of their contribution to date. The Tusk Wildlife Ranger Award recognises the dedication and bravery of rangers working to protect Africa’s increasingly threatened wildlife. The Prince William Award for Conservation in Africa is a lifetime achievement award which commends outstanding dedication and contribution to conservation.

Their Royal Highnesses will then attend a reception at the National Portrait Gallery to meet the award nominees, Tusk supporters and sponsors.

The Tusk Conservation Awards will be streamed live on Tusk’s Facebook page.

Catch up on The Duke and Duchess of Cambridge’s most recent engagements in the latest issue of Royal Life.